I did smile when I saw this advertisement from 1936 when a Police Public Call Box was seen as something other than a Time Lord's mode of transport. The Police Box is a public telephone kiosk or the use of members of the  police or for members of the public to contact the police. It was used in the United Kingdom throughout the 20th century from the early 1920s up until the early 1970's when the newfangled 2 way police radio ala Pye PF2AM/PF2FM Pockefone 70 series made them obsolete. The Police Box could also be used for the writing of a policeman's report, an incarceration centre when someone was caught bang to rights, somewhere for the police officers to take a crafty fag break, tea break or even by some villains - a "comfort break."  Although by no means luxuriously appointed, every Police Box boasted a stool, a table with drawer, a brush and duster, a fire extinguisher, a first aid kit, and a small electric heater as well as a light at the top of each box, which would flash as a signal to police officers indicating that they should contact the station

The design of the Police Box was finalised by Gilbert Mackenzie Trench during 1929.  By 1953, there were 685 police boxes on the streets of Greater London with over 1100 being built Nationwide. 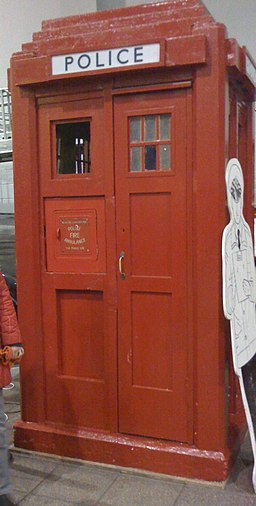 The majority of Police Boxes were blue but in Glasgow, they were red......
Moving back in time (sic), the Police Box was a beacon of safety and reassurance for the populace, however, today, the Police Box still has significance as a TARDIS.

Why I hear you non-Whovians ask?  Well The answer, of course, comes from the first series  of Dr. Who called "An Unearthly Child."  where two high school teachers  attempt to visit the home of their bright but curious student Susan Foreman. What they find instead is a junkyard with a blue police box oddly placed in the middle of it, inhabited by Susan and her grandfather, The Doctor.

Every TARDIS has a chameleon circuit built into it, to allow it to be programmed to take on any disguise to blend into its varying locations. After many travels and disguises, the First Doctor's chameleon circuit catastrophically malfunctioned for mysterious reasons after disguising TARDIS in its iconic form. And just like that the TARDIS would keep the appearance of a blue police box throughout the entire series. When Doctor Who was revived in 2005 the chameleon circuit remained broken, but  a perception filter circuit was added to the TARDIS, meaning that anyone who isn't aware of its presence won't see the blue police box stick out like a sore thumb.

Its a great story, however, like Father Christmas, the Doctor and the Tardis isnt real....... and the true story of why the Doctor's TARDIS has remained as a Police Box is actually because  Doctor Who did not have a huge budget from the BBC during its early days, and building many different versions of the TARDIS for each episode would have been very costly. So by writing in a malfunction to the chameleon circuit, only one time-machine set was required.